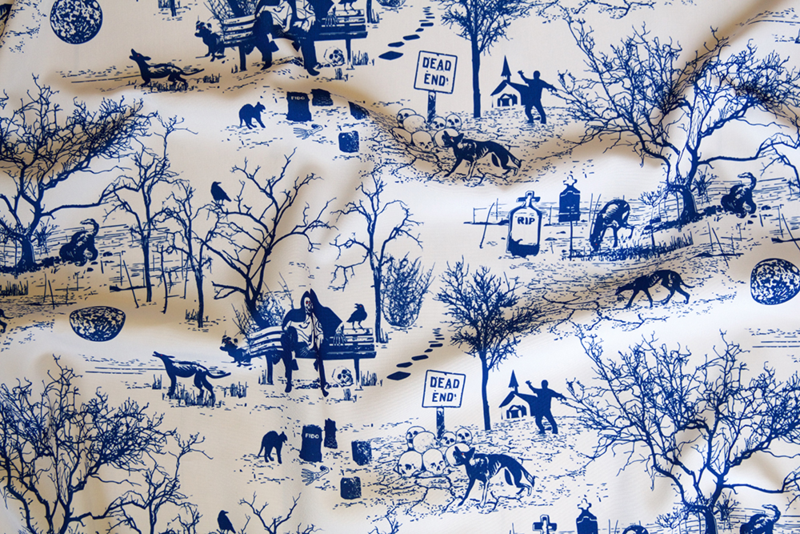 This Halloween, we asked you to imagine life after the collapse of society. Take a peek at the grotesque scenes designed by the top 10 winners of this week's Post-apocalyptic Toile Design Challenge–if you're brave enough, that is. Big thanks to Maria Faith Garcia for helping us envision trips to the dog park after the dust has settled with her design "Zombie dog park Toile" and be sure to check out all the top 10 winners printed on Silky Faille on our Facebook page!

540 votes for Zombie Dog Park Toile by mariafaithgarcia
2. 527 votes for Post-Apocalypic World Toile by juliesfabrics
3. 524 votes for Apnea City by chicca_besso
4. 519 votes for Post Apocalypse Toile Larger by vinpauld
5. 353 votes for grayday by patreddingscanlon
6. 331 votes for Sunday in the park after the worlds end by vo_aka_virginiao
7. 299 votes for Cold War Apocalypse by elramsay
8. 280 votes for Kitties of the zombie apocalypse by skbird
9. 277 votes for dystopian toile mono by scrummy
10. 269 votes for Crows by susan_polston

END_OF_DOCUMENT_TOKEN_TO_BE_REPLACED 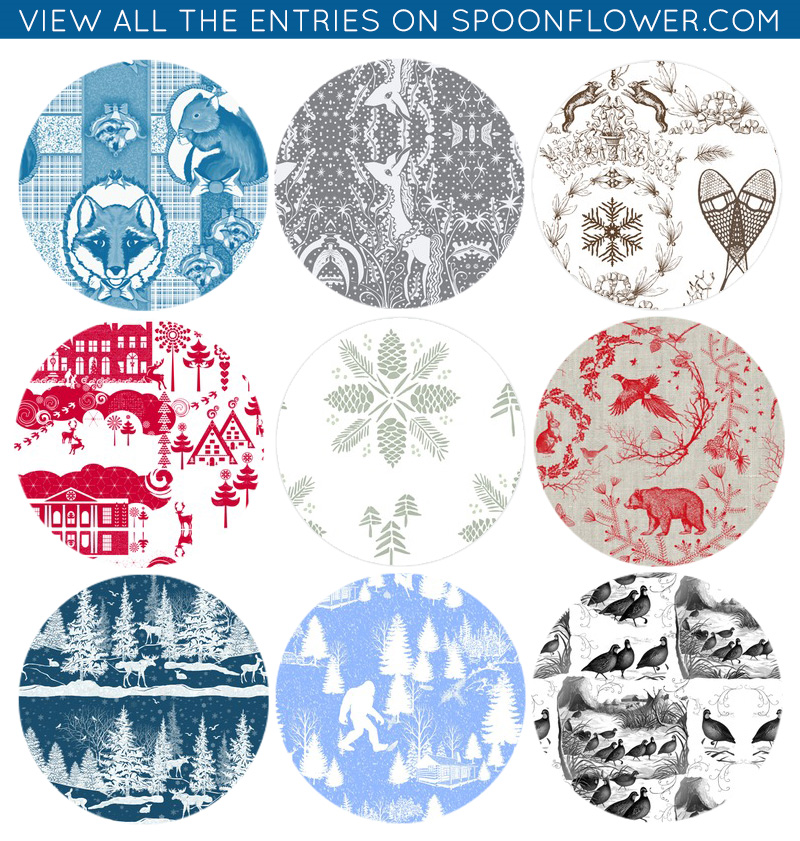 You know the moment you look out your window on the morning of the first snow and the whole landscape is transformed? Cast your vote in the Winter Toile Design Challenge for a tour through winter wonderland! 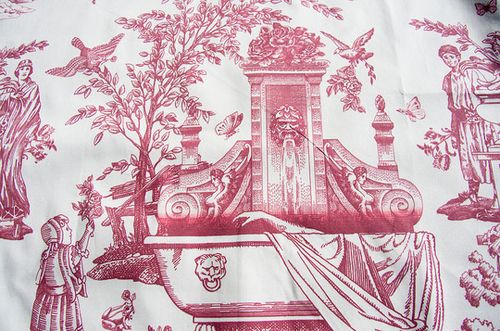 Around here we're big fans of the style of design known as toile de Jouy, popularized in the 18th century, which looks great on both fabric and wallpaper. What we like best about toiles is that while they come across as classical from an aesthetic perspective, the content of the designs offers a ripe target for modern commentary. For this contest, we asked designers to come up with a murder-mystery-themed toile de Jouy. The winner is Italian designer Chicca Besso's "Who Poisoned the Roses?" (pictured above). Congratulations to her and to the rest of the wonderful top ten!

1. 907 votes for Who Poisoned the Roses? by chicca_besso 2. 715 votes for mysterytoileMWrep150 by mjmontana 3. 636 votes for Murder is Afoot by jwitting 4. 549 votes for Killed! Two Birds with One Stone (Fingerprints) by sammyk 5. 535 votes for x_mystery_toile by mcuetara 6. 498 votes for The Case of the Sussex Beekeeper by marchhare 7. 420 votes for Miss Marple by laura_the_drawer 8. 411 votes for Unfortunato by mag-o 9. 350 votes for Murder on the Orient Express (Agatha Christie) by scrummy 10. 315 votes for Toile de Christie by artgarage

END_OF_DOCUMENT_TOKEN_TO_BE_REPLACED 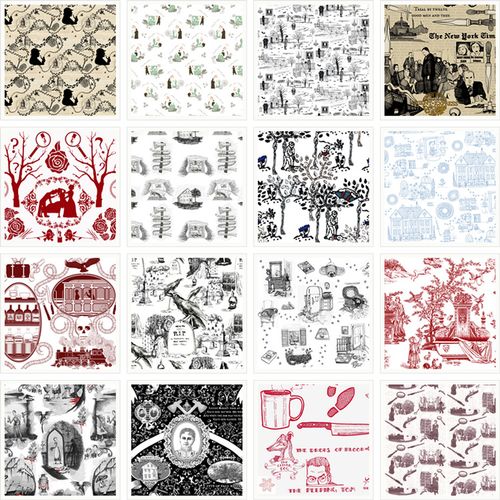 Fabric geeks know that toile de Jouy is a type of textile design popularized in the 18th century and that toiles typically depict a complex scene, often pastoral, arranged into a repeating pattern. Classical toiles are usually two colors, with white or off-white as the background color and the pattern printed in black, dark blue, or red. For this contest, we asked designers to come up with a murder-mystery-themed toile de Jouy. As we voted for all our favorites, we enjoyed imagining one or two of these as the wallpaper in Colonel Mustard's library.

END_OF_DOCUMENT_TOKEN_TO_BE_REPLACED

Congratulations this week go to Jane Walker, a talented and prolific illustrator with a special love for greyhounds. Her lovely greyhound toile very narrowly beat out SammyK's Barking Balloon Buddies in this week's dog-themed Fabric Of the Week contest. Thanks to all the dog-loving designers who participated!

END_OF_DOCUMENT_TOKEN_TO_BE_REPLACED

Congratulations to the talented Marnie Long of MDesignStudio in Austin, Texas. Her Toile Noir narrowly won over a  number of terrific toiles that garnered high vote totals. Check out the final results below.

Thanks to all the designers who participated!

Wow. It's not getting any easier to get all of these designs set up for voting each week. But it's worth it! 68 designs were submitted this week for our Toile de Jouy Fabric Of the Week contest. You can vote for all your favorites (on 2 polling pages) by clicking on the image below. Good luck to all!

Toile. The deadline for submitting a design to our toile de jouy themed Fabric Of the Week contest is tomorrow (Monday, January 11) at noon, EST. The entry form is HERE.

Details on the contest, including the rules & terms, can be viewed HERE.

Crayons. The next contest is restricted entirely to fabric designs created using wax crayons and digitized using a scanner or digital camera.

The goal is to see designs that have not benefited from a lot of digital editing or manipulation.  Deadline is Monday, January 18, 2010, at noon EST.

The entry form is HERE.

We're not giving you much lead time on either of these (pressure kicks your creativity into high gear, right!), but we've got two new themes for the Fabric Of the Week contest ready to go. The first is another color-restricted theme, and the other is something new for us — a spin on a traditional textile design form called a toile.

Birds: Using the specified palette [download as an aco file or Download as an HTML file], create a fabric design using birds as the design motif. Deadline is Monday, January 4, 2009, at noon EST. The entry form is HERE.

Toile de Jouy:  A toile is an 18th-century French style of
textile design consisting of "a repeated pattern depicting a fairly
complex scene, generally of a
pastoral theme such as (for example) a couple having a picnic by a
lake. Toiles also often consist of an arrangement of flowers." [Wikipedia]
These designs usually use a very restricted color palette — white or
off-white background and a foreground using a single, dark color such
as black, dark
red, blue, green, brown or magenta. Deadline is Monday, January 11, 2009, at noon EST. For examples, Google is always handy. The entry form is HERE.

Full rules and Q&A for our contests can be found here.