As we return to normal after last week’s Spoonflower Staff Challenge madness, I’m happy to introduce you to Jennifer Finan, help desk maven.  Jennifer also happens to have been my hanky-making partner in the challenge, so I enjoyed learning a little more about her pre-Spoonflower life in her own words.  I hope you do, too! 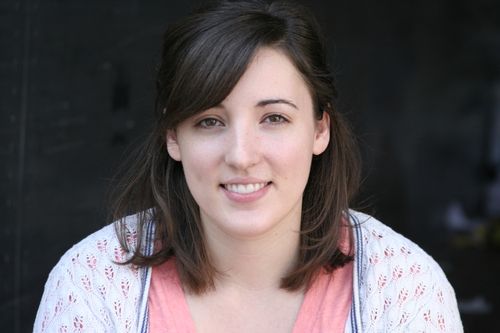 I grew up in Lansdale, Pennsylvania, a suburb of Philadelphia. Since leaving, I’ve developed an affection for my hometown but growing up outside of the city ingrained in me a desire to always want to leave and go to the city. Philadelphia offered art, music, humor, adventure, a sense of urgency and sometimes danger, whereas my town provided stability and safety. (You can probably guess which option seemed more appealing to a teenager!) Now I enjoy going back to visit, and I think having that duality of “town mouse and country mouse” as a kid was a really great balance for me.

My first job (besides babysitting) was teaching a swimming class to five-year olds at our high school while I was in the ninth grade. That summer, my best friend and I bleached and streaked hot pink through our hair. After a few pool sessions, my blonde-pink hair began to tinge green from the heavily-chlorinated high school pool. The kids loved it, though. I probably looked like a cartoon character.

When I was 20, the prospect of working all summer in a restaurant or something like that wasn’t really appealing to me. I ended up stumbling upon a website looking for au pairs (nannies) and immediately signed up.  I was eventually picked by a family who lived right outside of London. They sent me a plane ticket and, sight unseen, I arrived as their American nanny. In England, I developed a true appreciation for spicy curries, traveling alone, and English beer.

Prior to the winter of 2011 when I was hired at Spoonflower, I had worked mostly as an editor and writer for newspapers and several news-y blogs in North Carolina. I ended up in journalism almost on a complete lark. My real love was creating and editing video, which I had just gotten a degree in from Temple University in Philadelphia. I thought I would move to New York City and become a video editor. I even got a couple of offers to stay on with the various internships I had while in college. But the truth was that I was really restless after living in the Philly area pretty much my entire life. So when I found the opportunity to move to Appalachia to work for a New York Times regional newspaper, I went for it. It was just random enough to feel like an adventure.

I began as a copy editor, and quickly moved onto reporting and video. Short-form documentary video was just burgeoning back in 2008 as newspapers struggled to stay solvent with younger audiences.  I was happy to be a part of it with a company like the Times.  (You can view some of Jennifer’s videos here.)

I’ve had the most fun working on docu-style videos, profiling individuals and bands. One of my favorite stories and videos I did was on rescued wolf dogs. When I pulled up to interview a wolf farm owner, after somewhat miraculously navigating up a remote, unpaved road in my Nissan Altima, I was met by the howls of nearly seventy enormous wolf dogs. It was awesome…and kind of terrifying. I really developed a soft spot for wolf dogs after doing that story, though, and it even motivated me to adopt a rescue dog of my own.

That’s just the tip of my curriculum vitae iceberg. In general, I like to know how things work and I like to have fun. Working in customer service at Spoonflower is definitely my favorite job. It’s fulfilling and refreshing to provide an earnest service that allows me to learn something new every day. My favorite moments on the Spoonflower help desk, besides getting positive messages, are solving issues that have been causing a headache for the customer. It’s like a breakthrough moment in therapy and you go, “O-oooh! I get it!” The most frustrating moments include everything that happens prior to that realization. (Joke!)

Spoonflower is filled with cool, charitable people who are all talented in their own ways. It’s totally a compliment to be grouped along with them.  Working here, I now basically want to cover everything in fabric.  One of my favorite Spoonflower designers is Domesticate and I also adore anything by Anda. I basically love any designer that uses a limited color palette with bold graphics or illustrations. I also love anything printed on my favorite fabrics, our linen/cotton canvas and organic cotton sateen. Those fabrics make anything look great to me.

As for my own creative pursuits and free time, I’m currently in the throes of March Madness and am rooting for the UNC Tarheels to take all.  Despite that, though, I’m taking a break this weekend to visit some good friends in Washington, D.C. My friend Jessie Hemmons is putting together an installation at Corcoran College of Art + Design of her awesome knit bombery. I’ll probably find a way to squeeze in some NCAA action, though!

I have a growing list of future projects on the horizon, including setting up a homebrew kit because I’m a huge craft beer nerd. I’ve been lucky to live in NC which in my opinion has the best beer culture in the country, though Philly and Portland, OR are pretty exciting places for beer, too. Besides that, I’m planning on putting together some animated tutorials for Spoonflower users, and I’ll be sewing some actual summer clothes this season as well.

I’m really excited for the future. There are lots of places new to me that I want to explore, like the Falkland Islands (almost purely for the penguins), and also places I know I will always revisit, like Asheville, NC and Philadelphia. It’s good to have friends sprawled out all over the place with open couches.