This week, we're pleased to introduce Jake Hobbs, fabric printer and, incidentally, the younger brother of Darci Moyers in the Spoonflower marketing department. See the resemblance?  Like his sister, Jake is also a multi-skilled employee at Spoonflower, performing various tasks around the shop including the much-envied task of forklifting heavy, expensive equipment deliveries off big trucks.  Read on for more about Jake, in his own words. 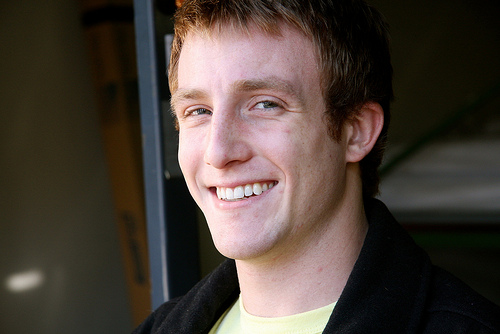 I spent my childhood in Denver, Colorado, and when I was younger I absolutely loved Legos because I liked building things. My favorite was Lego Technic sets — robots that you build with Legos.  For my first job in high school, I worked at a psychiatric hospital in Springfield, Missouri. I prepared and served food for the patients. My favorite job — although it didn’t pay much — was driving a rickshaw in downtown Springfield. That was the most fun because I got to meet very interesting people and, at the same time, got a good workout pedaling people all around the city.  My least favorite job was selling fiber optic Internet and television service door-to-door in southern California.

So far today at Spoonflower, I have packaged fabric and unpacked a pallet of shipping supplies. The most fun I have here at work is when we have to receive any kind of big machines like fabric printers or fabric heaters. I find it really intense because they are usually heavy, cumbersome, and valuable. We also name all of our machines so it’s exciting to add a new member to the manufacturing family.

My favorite animal is the rhino. I like rhinos so much because it is physically impossible for them to look behind them. They have two-inch thick skin, and they charge at anything unfamiliar to them.
If I could have any superpower it would be flight, mostly because it would be fun, but also because it would save on car insurance and be much more fuel efficient. Before I die I plan to go wingsuit jumping. I’ve never even been skydiving before but it’s a goal I’ve had for a very long time.  For this weekend, though, my roommates and I are having a Super Bowl party.