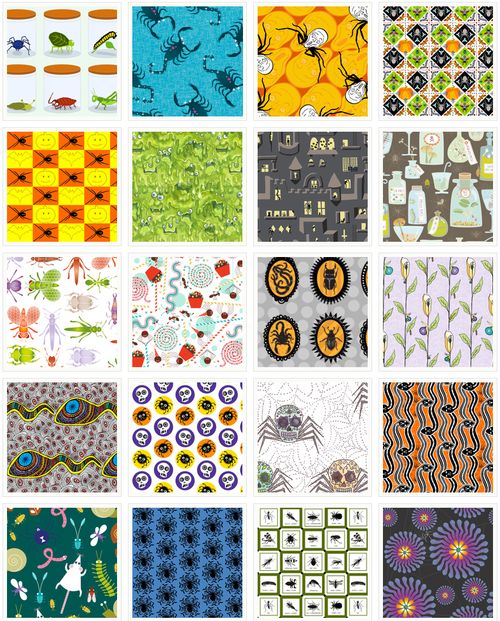 Continuing
our seasonal contest themes, this week we're asking you to vote for
your favorite creepy crawly fabric designs. Most are more cuddly than
creepy, but there's still plenty of great material here for Halloween
decorating ideas.

END_OF_DOCUMENT_TOKEN_TO_BE_REPLACED

Congratulations to Joanne Burgess of Stourbridge, West Midlands in the UK! The lime green colorway of her "dragonflyge" fabric squeaks out the win in this week's Fabric Of the Week contest, the theme of which was camouflage. This fabric will make excellent frog-hunting garb for 5-year olds everywhere.

Thanks to the designers who participated! Final voting results:

END_OF_DOCUMENT_TOKEN_TO_BE_REPLACED Congratulations to Julie Shaw of Surrey — her Green Lacewing fabric crawled to the top of a wriggling mass of terrific designs in our bug-themed Fabric Of the Week contest.  Like our other winners, Julie will receive five yards of free Spoonflower fabric.

The top ten bug fabrics from last week's voting were:

Thank you to all the great designers who participated! Find information on upcoming contest themes (posted thus far) — including next week's Steampunk contest –  HERE. This week's fabric design theme is BUGS! We have a whopping 106 creepy-crawly fabrics to admire this week.  The ballot has three pages and — as usual — you can 'check' as many designs as you like.
VOTE FOR YOUR FAVORITE BUG FABRICS