Huge news for designers: we’re taking our 10% designer commission and adding a bonus! If your monthly commissions exceed certain thresholds, you will retroactively qualify for an additional bonus commission on top of what you’ve already earned. And on top of that, you will be paid out every 14 days (instead of once a month) with no waiting period. We’ve even added a new payout threshold of $10 (versus the previous $20) so you can transfer that cash to your bank account even faster than ever. Check out our infographic below which breaks down the new commission tiers.

There’s no need to sign up or do anything differently, all you need is to make sure you are a verified seller on our site, and that your Paypal information is updated in your account. You can update that by logging in and clicking on “My Account” under “My Studio” and selecting the “Spoondollars” tab. 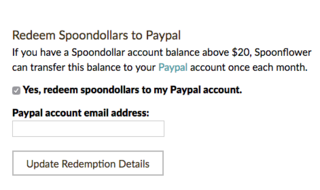 Sales not quite up to any of these tiers yet? You’ll still earn 10% on every sale–all day, every day. From professional designers who use Spoonflower for their entire income to hobbyists wanting side cash, the Spoonflower Marketplace is for everyone. And you always keep the rights to your work!

Spoonflower is experimenting with selling printed fabric on external marketplaces such as Etsy, Amazon and Ebay to increase your visibility and sales. Want to know how to join in? It’s completely free and you still earn the same commissions as you do on the Spoonflower marketplace. Just head to your account settings and click on “design distribution” to opt in. More information is available on our Help page article here. 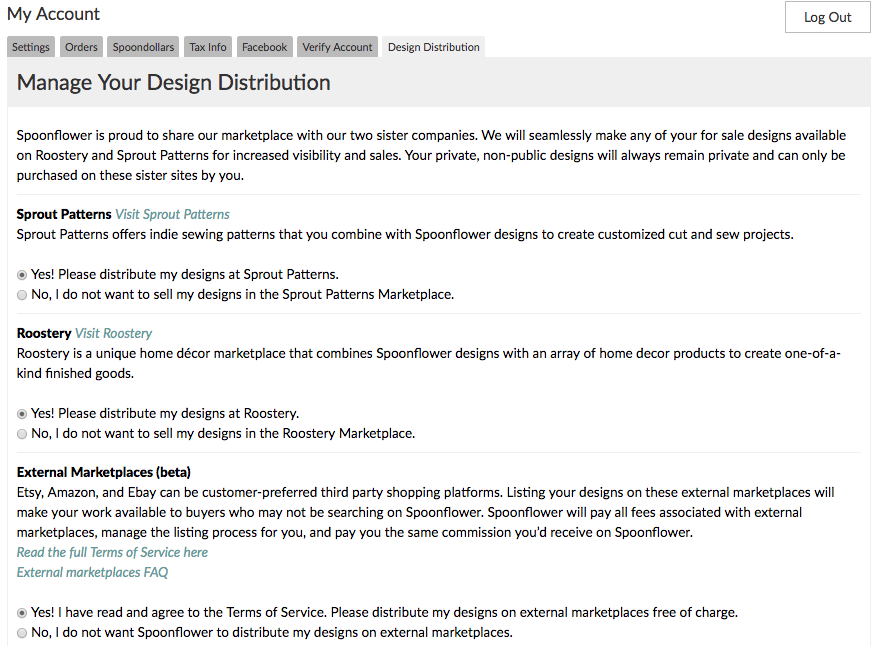 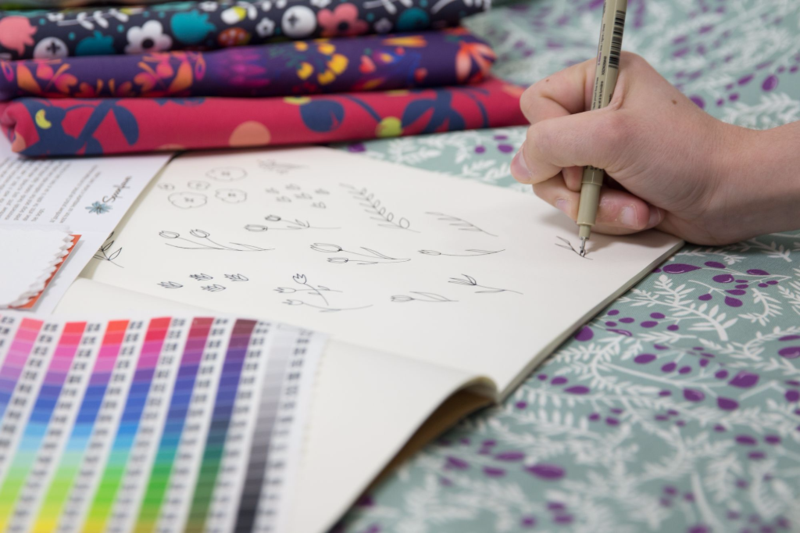 When you thrive as a designer, we thrive. We are committed to providing a platform for you to be successful and share your designs with the world while being compensated fairly. Get to know fellow designers and learn more about all the vast ways you benefit from offering your designs for sale in our Marketplace, from free promotion, distribution on external marketplaces and through our sister brands, and exposure to our vast community.

Save 10% when you order your own design, and earn up to 15% when your design sells.

As designers who use Spoonflower know, we’ve always had a bit of a flaw in our commission policy. When you make a design available for sale on Spoonflower and someone else buys it, we pay you a 10% commission. All well and good. The exception to this has always been swatches, which until now have not paid any commission. The reasoning behind this went as follows:

Swatches act as test pieces for larger purchases. We want to make these 8″ x 8″ squares of fabric as cheap as possible — and now and then, as on Free Swatch Day each year, even to make them free. Designers share our interest in making swatches as accessible as possible as an investment in selling more fabric later.

Flash forward two years to now, after we’ve been able to study data from shopping behavior (and designer sentiment) over a fairly long stretch of time. It turns out that in many cases swatches have a value on their own, either as squares for quilts, patches, or — as in our recent ornament contest — as 8-inch-square cut & sew patterns. When the end product is a swatch, it’s not fair not to pay a commission.

We still want to be able to give away swatches sometimes, but after a good deal of thought and analysis, we’ve decided that even when we give away swatches, we can still afford to give designers their $.50 Spoondollar commissions. We will absorb it as a promotional cost. The only difference now between swatches and other fabric sizes is that, when you buy your own swatch, the $5 price will not receive the Everyday Designer Discount of 10%. So swatches will still cost $5, but if you are a designer who sells fabric in the Spoonflower marketplace you’ll now be able to earn Spoondollars on all the swatches you sell to other people.