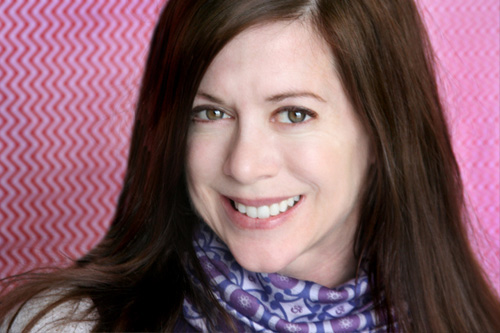 This week, I have the pleasure of introducing you to Caroline Okun, a graphic designer at Spoonflower. Caroline designed our logo and other elements of the site when we first launched in 2008, and is now working with the engineering team on a more regular basis in the sunny front offices at Spoonflower. I hope you enjoy reading about Caroline in her own words as much as I did!

My childhood on Long Island, New York was centered around any type of artistic activity — drawing, painting, clay, building forts. Our neighborhood had a lot of kids in it so we were always outside playing ghost tag, street tennis, or your basic hide-and-seek. I also have quite a competitive streak, so I gravitated toward any games that had teams or the possibility of a ribbon or trophy. I was on a swim team for 10 years, and at school I played lacrosse and field hockey.

During the summers, I started a small business selling sodas and snacks at the pool after swim team practice. I was 12 years old. Luckily my father didn’t charge for driving me back and forth to the store to restock supplies so I was able to make enough money in a few months to buy a small sailboat. That was certainly fun and I got a tan while working, but my favorite job was working as a DJ at WKNC. It’s a college station at NC State University in Raleigh, NC, but a lot more professional than your average school station in terms of technology and opportunities. I interviewed a lot of musicians, my favorite of which was Greg Graffin from Bad Religion. I also interviewed Motörhead, Deftones, and Tool.

On Valentine’s Day in 2008, I got an email from Stephen asking me to work with him and Gart to design the Spoonflower identity and website. At the time I was working at Lulu.com as a graphic designer, and I knew Gart because he had hired me to work at Lulu a year earlier. Fast forward four years. I was no longer at Lulu and was looking for a new job. Gart gave me a call, we chatted, and shortly thereafter I was very happy to join the team!  I now work on the Spoonflower engineering team primarily designing web pages and elements. (Under the tutelage of Stephanie and Chad, I’m learning HTML and CSS.)  But I also create print collateral, fabric tags, packaging and whatever else we might need to visually represent Spoonflower.

I wanted to go to art school out of high school, but my parents thought I should be a lawyer (I like to talk!), so I went to college at UNC-Chapel Hill. In every job I’ve had since then, I’ve found a way to design something – logos, brochures, posters. When I tried to find a job specifically as a designer, though, I was told to go back to school and fine-tune my skills.  After having been out of college for a few years then, I went back to NC State as a sophomore in the design school. My personal site is a work in progress, but a lot of what I’ve done is here. What inspired me way back when is still true now.  Design can’t exist in a vacuum. It needs to be seen, interacted with, and used to influence and guide.

Some of my favorite Spoonflower designers are Holli Zollinger, Heather Dutton, Gollybard, and Zesti. They all have a phenomenal sense of color and layout and innate design ability.  Using some of their printed designs and some of my own, I’ve been learning to sew. Stephanie helped me to get started and I’ve been going full speed since December. For a while I was in tea towel production, but now I’m working on a design for a yoga mat carrier that will be featured in the Spoonflower staff design challenge and hopefully picked up by Lululemon afterwards!

Part of what I love about working at Spoonflower is our esprit de corps. The engineering group recently purchased a panini press and we’ve been making grilled cheese with guacamole. Gart’s dachshunds were in the office recently and one of them was sitting on my lap during lunch. I looked away for just a second and he had taken a huge bite out of my sandwich! It was pretty funny – I think Chad was crying, he was laughing so hard. 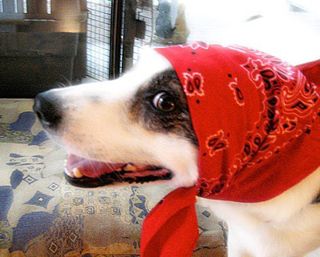 I spend weekends taking long walks with my dog, Alba. Her full name is Albatross Cyan Creature of Destruction. She was a rescue from a kill shelter in Durham. While all the other dogs were barking and jumping around, she was quietly laying down, her nose sticking under the gate, following me with her eyes. It was love at first sight. She is part Australian shepard and part pit bull as far as I can tell. Her tail was cropped and she has a dark ring around it which really stands out against her white fur.  If Alba was a person she would be Hannibal Lecter. I know that sounds morbid, but she is ridiculously protective and can be scary when you first meet her. Once she gets to know you, though, she’s all love and kisses (but she’s never cooked me a gourmet meal served with Chianti).

One of my goals is to become a certified diver. I’ve been snorkeling since I was four, but have only been diving once. Last winter I was in the Bahamas and we dove a wreck, about 30 feet down. The water was crystal clear and there were tons of gorgeous colorful fish. When I looked up at the top of the wreck there were seven huge barracudas floating there, sort of like bouncers at a club!

Once I’m scuba certified, I’d love to take diving trips to Thailand, Australia, Central America, the Caribbean, and South Africa. Last year, I embraced jumping out of a plane but decided I’d rather be under water than in the air!