The color to avoid over the coming year is one called “Neon Slime Lime,” according to a global panel of designers asked to identify 2016’s single “most unfashionable and ‘off-trend’ color.” 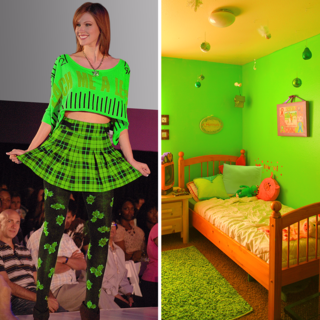 Neon Slime Lime in situ: how it would look in a room or on the runway. Credit, left photo: Mark Taylor Cunningham. Photo was altered. License. Credit, right photo: D Sharon Pruitt

The garish, “retina-searing” shade of fluorescent green is the landslide choice of the world’s largest community of independent fabric designers at Spoonflower.

A panel of 270 fabric designers, drawn from Spoonflower’s community of designers in over 15 countries, has named Neon Slime Lime (hex code #00FF00) this year’s color to shun for décor, design, fashion and … anything else.

“If people today are seeking serenity and a chance to de-stress, this won’t provide it,” says Robin Szypulski, a senior designer at Spoonflower, which lets users design, print and sell their own fabric, wallpaper and gift-wrap. “It’s more likely to make them wince, cringe or want to hide in a dark room.”

An annual announcement of the ‘Color of the Year’ has become a ritual of the design world. It normally comes at the end of the preceding year and names one color – or, sometimes, two – predicted to be most fashionable, on-trend and in tune with the times.

“We wanted to find the opposite – the color likely to be most ‘off-trend,’ unfashionable and out of tune with the mood of the times,” says Spoonflower’s Robin Szypulski. “So, we asked people who know about colors and color trends as part of what they do.”

Spoonflower therefore first asked 30 of its most popular designers to submit nominations for the title of 2016’s most unfashionable, ‘off-trend’ color. 270 of Spoonflower’s “power designers,” who earn money from selling their designs on the site, then picked from the resulting short-list of eight nominees.

“Neon Slime Lime” was the landslide winner, with 58% of the votes, over five times as many as its nearest rival.

The winning color is formally known by the international Hex system of color classification simply by the code #00FF00. It was given the new name of “Neon Slime Lime” by Kim Niles, an illustrator, artist and Spoonflower fabric designer from Oak Harbor, Washington. Other suggestions ranged from “Blinding Radioactive Lime” to “Screaming Leprechaun Green."

"Green is the colour of nature,” said Ruth Robson, from March in Cambridgeshire, UK. “But this green is so unnatural it just screams ‘Run away.’”

If the color now dubbed “Neon Slime Lime” ever did have its moment, it was in the 1980s when – along with other day-glo colors like hot pink – it enjoyed a vogue among designers of windbreakers, jogging suits, leg warmers and hair scrunchies.

It’s nowadays more associated with highlighters than high fashion or interior design. Even if the 1980s do one day make their occasionally predicted design comeback, Neon Slime Lime surely won’t be part of it.

“Neon green can only be worn by elves, gnomes and maybe a fairy attending a music festival in the swamp,” says Virginia Odien, a fabric designer from Riverside, California.

“Of all the colors in the spectrum,” adds Spoonflower’s Robin Szypulski. “Neon Slime Lime is the one to exclude from ALL your designs this year.”

Spoonflower first asked 30 of its most popular designers to submit nominations for the title of 2016’s most unfashionable, ‘off-trend’ color. In a second round of consultation, 270 of Spoonflower’s “power designers,” who earn money from selling their designs on the site, then picked from the short-list of eight nominees the one that was, in their opinion, likely to be the single most unfashionable, most ‘off-trend” color’ – i.e. the color to avoid – in 2016. Many also suggested names for the colors they picked. 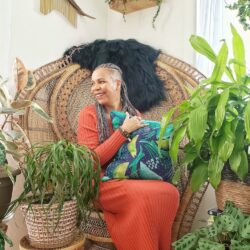 6 Black Interior Designers You Should Know with Tracey Hairston

See Where You Ranked in the Continuous Line Contour Design Challenge 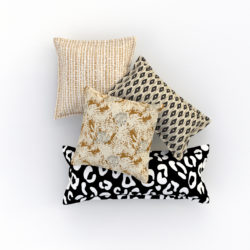 Refresh Your Space with These 5 Tips for Styling Throw Pillows 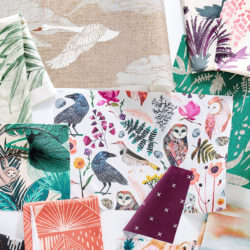 4 Color Palettes Inspired by Nature To Refresh Your Rooms

« Vote for your Favorite Piñata Designs!
Digital Download Day: Fun Florals »
We use cookies to enable and enhance your site experience. By continuing to use this site, you agree to our use of cookies.OkLearn more