This is the fourteenth in our series of staff project posts created for the Spoonflower Staff Quilt Challenge. Voting for this contest opens tomorrow, Thursday, 3/14. 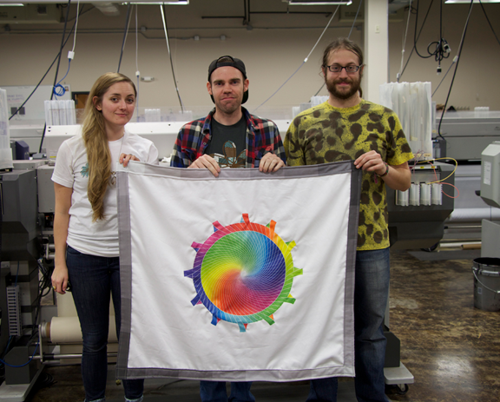 For the 2013 Spoonflower Staff Challenge, our team decided to make an unconventional quilt. As printer operators, Adam and I (Kelsey) are constantly working with color, while our other teammate, Chad, spends most of his time in the Engineering Department. So, in order to use everyone’s talents, we came up with the idea of an illuminated color wheel quilt.

The first step was to design a color wheel. 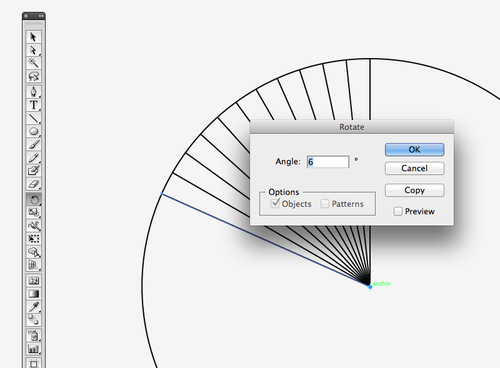 After we established the concept, Adam utilized a few functions in Adobe Illustrator to make the base of the design. First he used a little math to separate the circle into 60 equal sections. 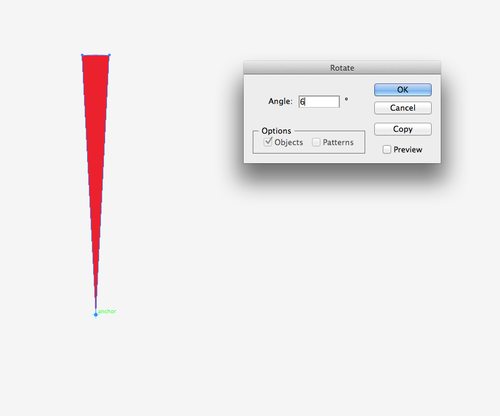 Once Adam had the angle for each section he used the “Copy Rotate” feature to complete a 6 degree rotation, and then used Command D until he was back at the beginning. 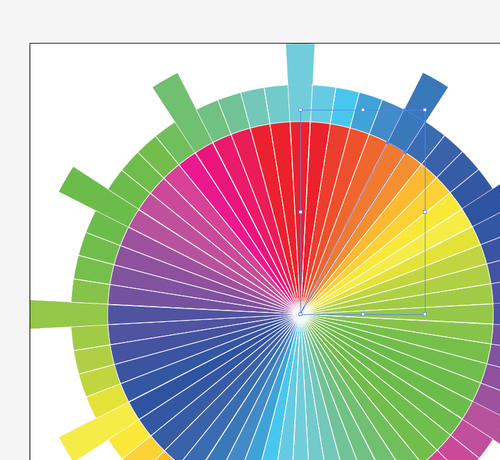 From here Adam blocked in the shape of the pie slices and repeated the same process until he had a full circle. After that, he colored in each section and applied a small white stroke to differentiate between each color. 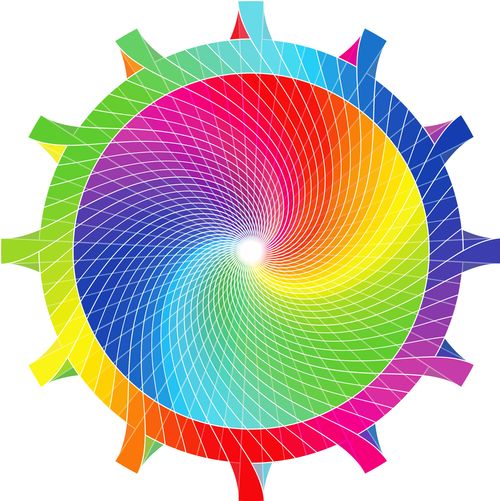 Upon finishing the basic design in Adobe Illustrator, Adam dropped the color wheel into Photoshop. Then he used the “Filter Twirl” to trippytize the color wheel and give it a little more movement. From there Adam played around with a few of the layer options over the unfiltered color wheel to try get a nice balance of what he calls "structured trippy."

The second step in this process was to gather the proper materials. 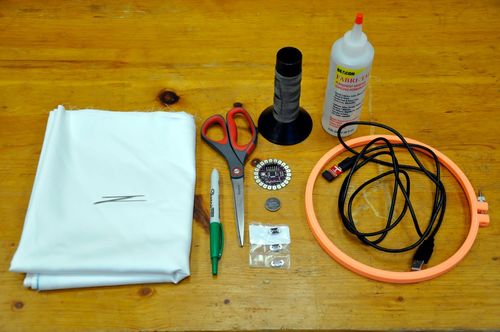 For the inside of our quilt, we used a template printed on fabric, small LED lights, conductive thread (to create a circuit), fabric glue, LilyPads (the brains), small batteries (for power), embroidery hoops (for hand-stitching), and a serial port cable to test the lights.  Most of the circuitry we found at SparkFun.

The third step was to engineer the lights to the LilyPads. 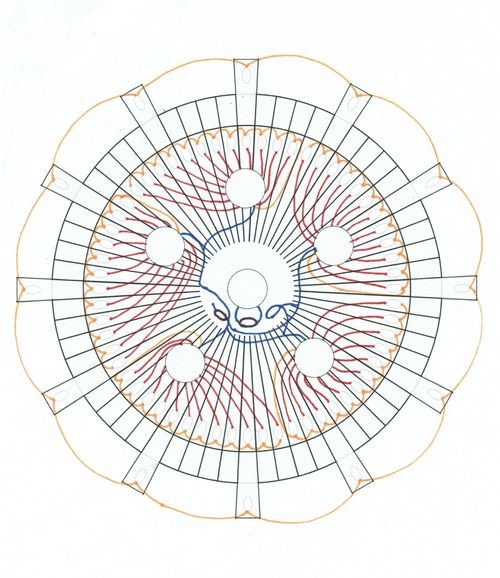 Basically, we ran lines of conductive thread from the LED lights to tiny ports on the LilyPads to create a simple circuit. Then, we added batteries to power the circuits. 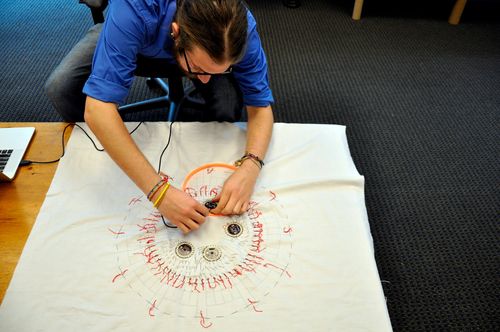 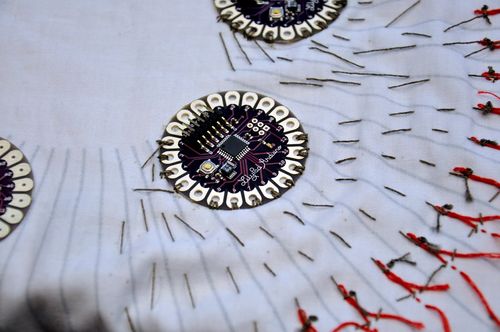 The fourth step was for Chad to write code for the light pattern. He used an open-source program called Arduino which uses the C programming language to create simple loops that manipulate the actions of the LEDs.

The final steps in this process were printing our final design, laying it over the template, and sewing everything together. 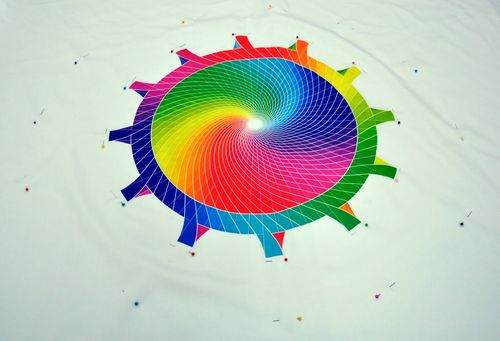 This took a big effort for our whole team, as we were running right up to the wire.  Lots of soda, coffee and a few broken needles later, we ended up with the finished quilt. 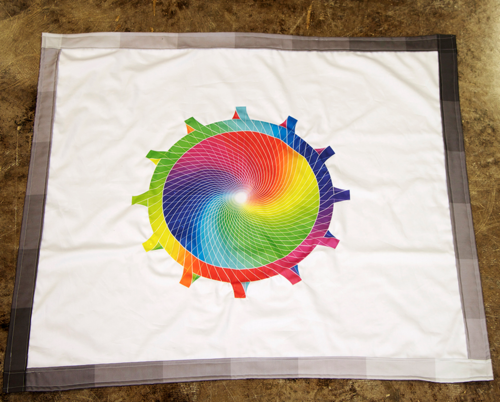 We put in the batteries, crossed our fingers and watched our quilt come to life. 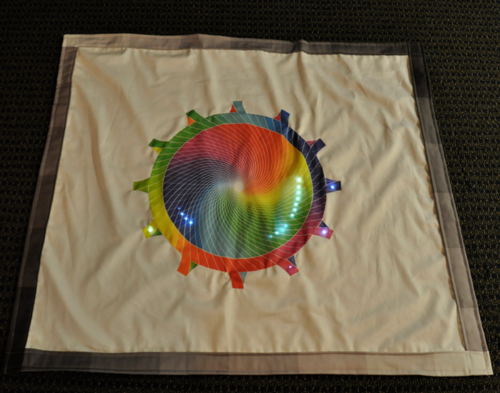 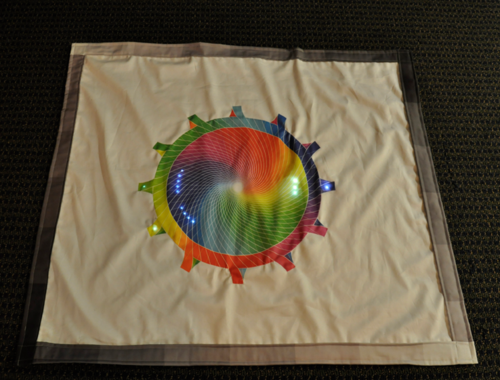 Here’s a short video of the quilt in action:

So the quilt turned out great.  We were all really happy with the results.  It might not be the most comfortable quilt to sleep under, and it probably wouldn’t keep you that warm, but it’s definitely the most colorful one out there.  We hope you think so, too. 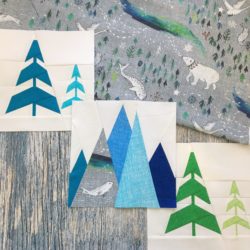 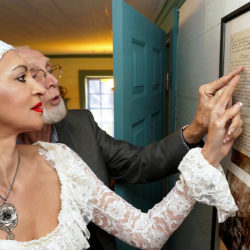 « 2013 SPOONFLOWER STAFF CHALLENGE Pt. 13: Flight Kite Quilt
2013 Spoonflower Staff Challenge Pt. 15: Craft Closet Of ... »
We use cookies to enable and enhance your site experience. By continuing to use this site, you agree to our use of cookies.OkLearn more