2012 Spoonflower Staff Challenge Pt. 8: The QR Code Quilt, or How A One-Handed Person And A Sewing Newbie Made A Thoroughly Modern Quilt

This is the eighth in a series of posts describing the projects that are part of our 2012 Spoonflower Staff Challenge. Voting begins on Thursday, March 15, 2012. 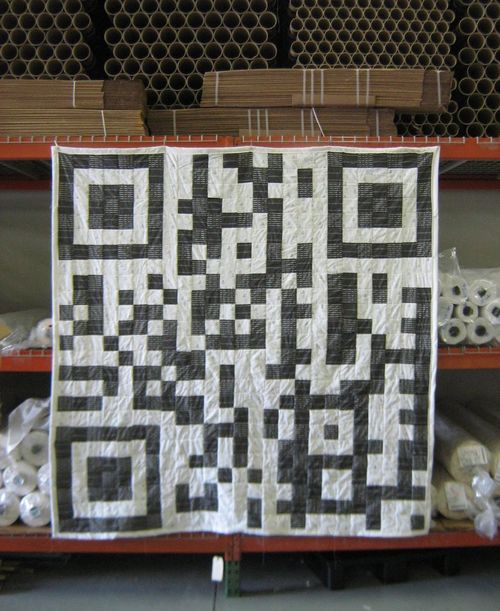 A QR code, or Quick Response code is a somewhat new technology that, when scanned by a smart phone or iPad app, takes you to a website or texts you with more information about a product.  You see them everywhere now, from cereal boxes to bus stops.  From the moment Jake got his new phone, he was obsessed with them.  I remember he used to talk about how production at Spoonflower could be more efficient if we could just walk around scanning QR codes to look up orders and find out information about rolls of fabric.  As for me, I just liked how they resembled little patchwork quilts.  So when the staff challenge was announced, the idea of making a QR code quilt seemed perfect.

Our first step was to pick our QR code.  Every web page has a corresponding code, so we had a lot of silly ideas about what site to choose.  For loyalty’s sake we chose Spoonflower and with a simple free online code generator, Jake was able to print out an image of the QR code for the Spoonflower site.  We used this as a guide for our quilt. 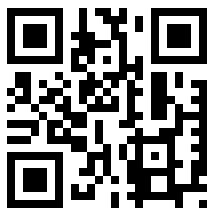 We wanted our quilt to be more than just a black and white grid–no cheater quilt for us!  So we decided to make individual designs that would be cut up and incorporated into the larger QR code pattern.  We each made two designs: one predominantly black, and one mostly white.  Looking back, we realize we could have used any two colors with a high contrast, but the QR codes we are familiar with are black and white, so that’s what we did.  Keeping with the code theme, each one of our designs features a different code of communication, and each one spells — can you guess? …Spoonflower!

Jake chose to use binary code and smoke signals in his designs.  And he wants you to know that you don’t even need a computer to make a fabric design!  He drew his smoke signal design with a stylus on his iPad, using a program that would work on an iPhone too.  (He of course needed a computer to upload the drawing to the website, however.)  I’m pretty sure he became the first smoke-signal-fabric designer that Spoonflower has ever had.  I made designs using Morse code and the semaphore flag alphabet.  The night I made my Morse code design, someone actually ordered a swatch of it about an hour after I uploaded it!  (I wonder if they know it spells Spoonflower?) 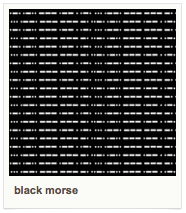 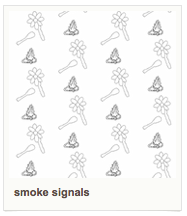 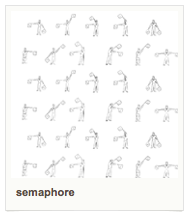 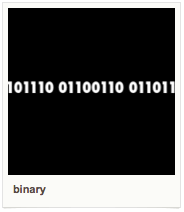 We chose Kona cotton for our quilt, because it’s so soft and easy to work with.  The Spoonflower QR code is made of 625 squares (25 rows of 25) so for a roughly queen-size quilt, we printed 3 yards of each design and used 4-inch squares with a half-inch seam allowance.  Jake and I argued about whether or not the quilt should be totally gigantic, but I think he’s glad we kept it somewhat small.

As soon as our fabric was printed and ready to go, however, tragedy struck.  I broke my hand.  If only my car accident had occurred after the Daytona 500, I would have known to let go of the steering wheel on impact!  Sigh.  I broke the fourth metacarpal in my right hand, and I’m right-handed.  Still, I was determined to make this quilt, so I just sewed myself a cute cast cozy and started using the left-handed rotary cutter instead. 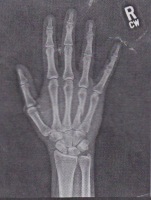 The next step was to cut the fabric into squares and plot the chart of how to sew them together.  It seemed right that no adjacent squares should be the same design, so in order to plot the layout of all the squares, I drew a map on graph paper of how to sew the squares together.  It’s like a code all on its own!  It took a long time to make this chart with my left hand, but it was so useful during the sewing process. 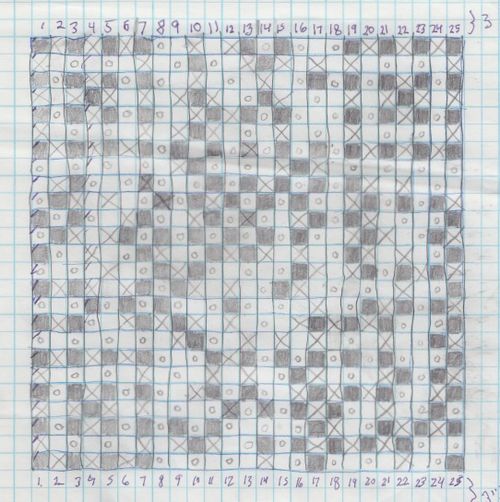 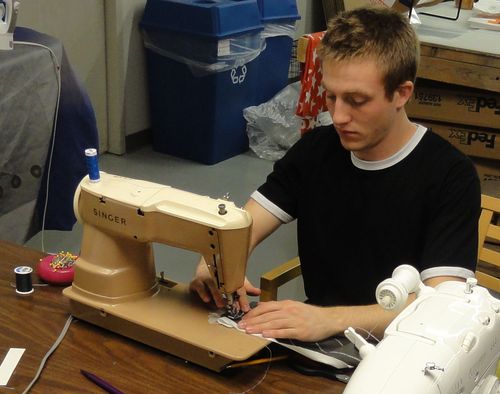 Turns out that sewing machines aren’t as complicated as they look.  After a few squares he was a natural.  He even learned how to load a bobbin.  Jake’s dog, Grace, a rescued Boxer, looked on with curiosity. 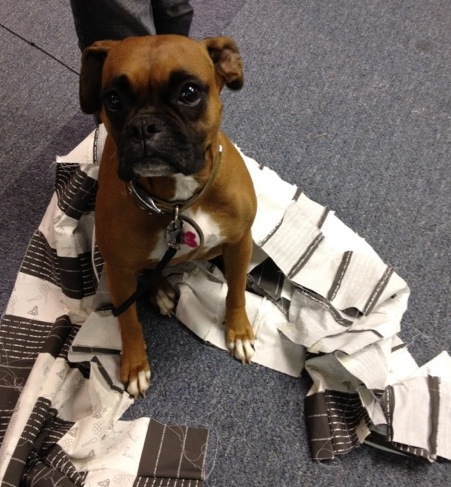 Grace helped us sort the strips of squares.  A huge thank you also goes out to my mom because during this part of the process, she came to Spoonflower and helped Jake and I sew the rows of squares, trim the seams, and iron them. 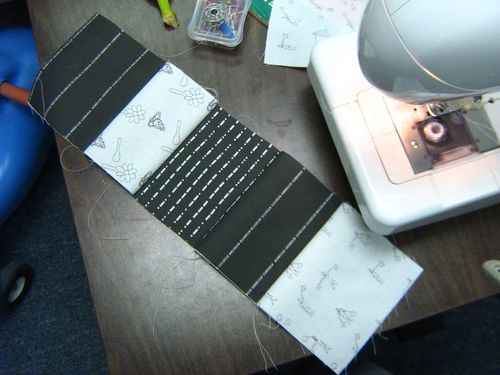 My mom joked that the only time she sees me is when I need help with something, but I actually need her help a lot!  My mom is a very talented crafter, and she inspires me in so many ways.  I’m blessed to have her live so near!  In fact, she would not let us give up when it was late and we’d been sewing all day.  “I’m not leaving until I see the finished quilt top!” she said. “We have to scan it and see if it works!” 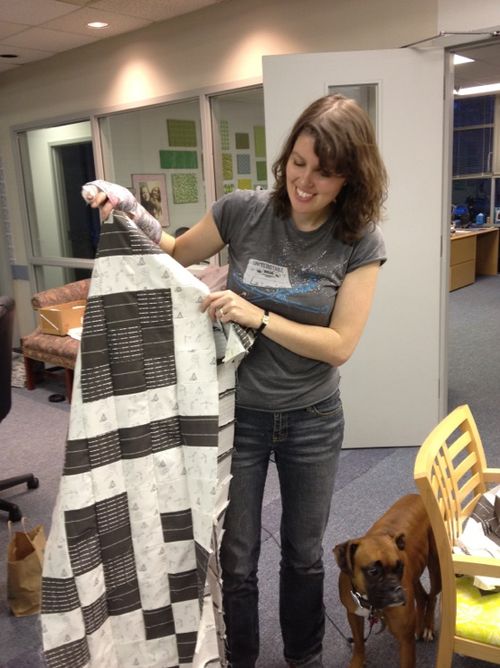 So Jake and I sewed like the wind and finished the top of the quilt.  Then we held it up and he scanned it with his phone and… it took us to the Spoonflower website!  Despite our sewing imperfections (I think some of the Morse code squares might be upside down) and tons of loose threads, it actually worked!

The next day we spread the quilt top over a backing made of plain Kona, with a layer of batting in between, and my mom helped us pin it all over with safety pins. 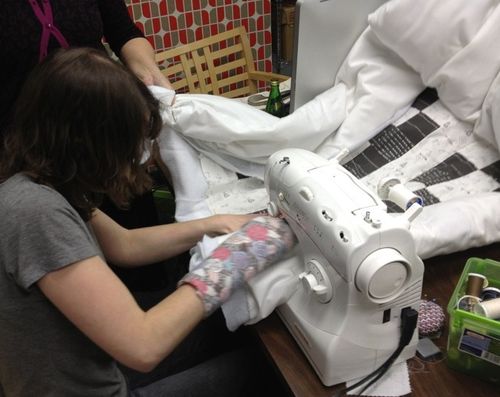 Pin basting helped us keep it all together so we could sew it without a quilt frame.  The next step was to sew down each seam, through all the layers of the quilt, both vertically and horizontally. For all you real quilters, please do not be horrified. This was a quick quilt, renegade style.  A close inspection of our handiwork is not recommended!  However, this quilt does two things: it takes you to the Spoonflower website and it keeps you warm.  What more could a person want? 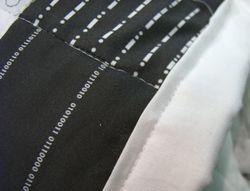 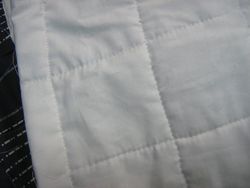 The very last step was to fold up the edges of the Kona backing around the sides of the quilt top and sew through all the layers.  Gart saw me doing this part, and it was his first glimpse of the quilt.  “I’m geeking out!” he said, incredulous that it actually was a scannable QR code in quilt form.  Yes, it’s a melding of very old and very new technologies.  We hope you like it!  Meanwhile, Jake will be taking a nap in it. 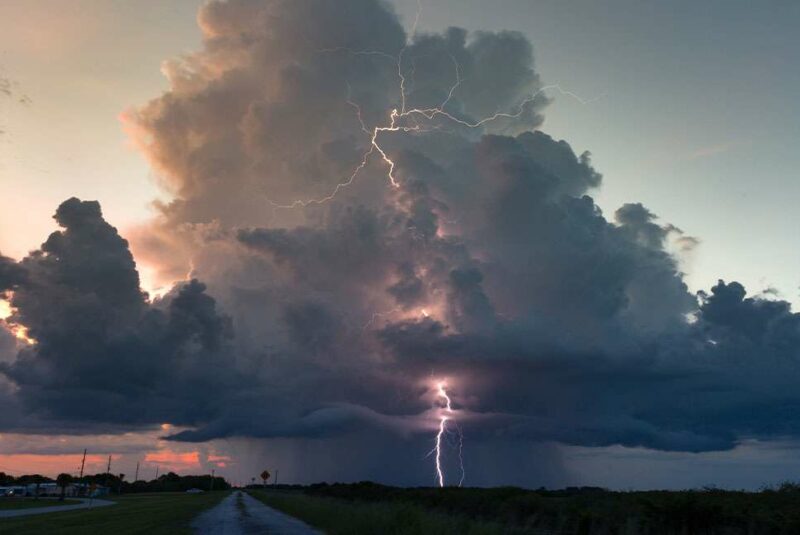 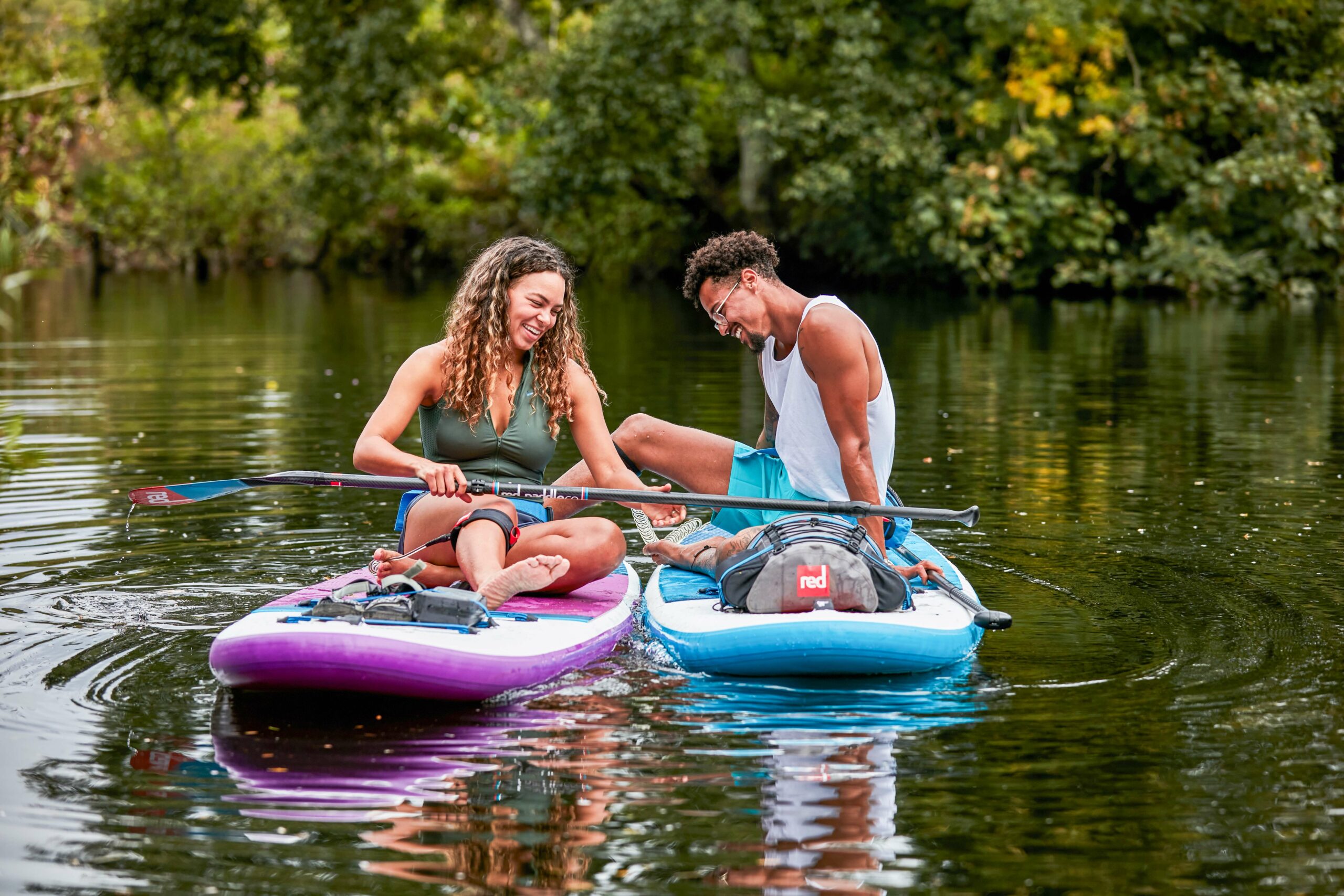 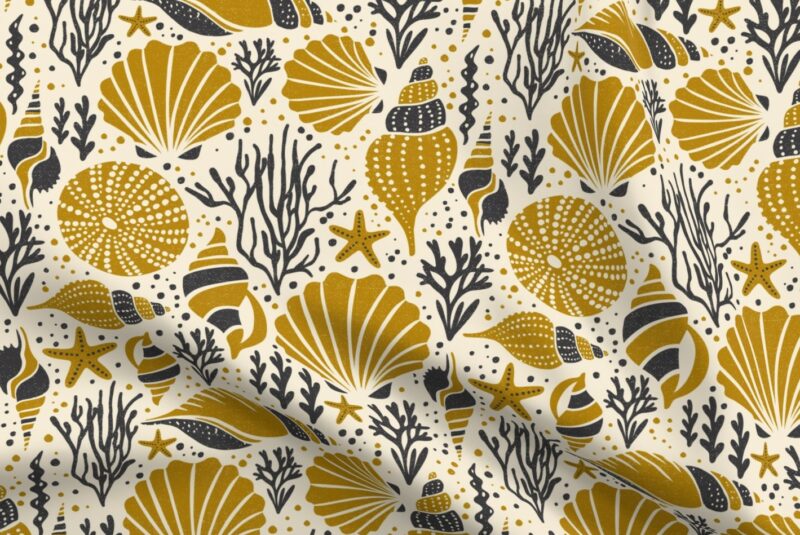 See Where You Ranked in the Seashells Design Challenge