This is the first in a series of blog posts describing the projects in the 2012 Spoonflower Staff Challenge, an annual event in which we put our own creative talents to the test and ask you to vote on our work for a change. This year we divided Spoonflower (30 folks at present) into teams of two and asked each team to create an original fabric design. We also asked each team to create a finished project using its fabric and to document the project for the Spoonflower blog. I think you'll be entertained by the results. We'll post a couple of projects each day, but voting will actually start Thursday, March 15, 2012.

The first team to report back consists of yours truly (Stephen F.) and Beth, help desk ninja and master seamstress.

Stage One: Brainstorming. Before we started, I was convinced we had to design a plush toy of some sort. Unfortunately Beth rejected outright my first suggestion, which was a pillow doppelgänger of barefoot Spoonflower coder Chad, a project that would almost certainly have guaranteed our victory. Beth, a trained historical costume maker, suggested instead that we create a corset. Ignoring this, I countered with the inspired notion that we create a life-size plush version of my Spoonflower co-founder, Gart, who is 6' 6". At this point Beth started to look stressed. Aware that if our team was going to create anything at all then most of the work would almost certainly have to be done by Beth, I relented. "What about an animal?" she said.

I pondered for a moment. "How about a unicorn?" I have three daughters, so a unicorn would be guaranteed to garner all the votes in my household, at the very least.

The last thing I heard Beth mutter before heading back to my desk was, "It's going to be really big."

Stage 2: Beth Prototypes. After our arduous brainstorming session, next in the process came the (overrated in my view) stage in which actual skills are applied to do actual work. Here's Beth's take on this stage:

Although I have done quite a bit of patterning for garments, I have not previously made a plushie cut and sew pattern. The first step to creating this design included lots of research. With a bit of knowledge and creativity, it's quite easy to imagine how the pieces of a cut and sew pattern will fit and look when finished; however, there are also tons of resources available online that provide free patterns for various animals. I was unable to find one that would be easily adapted to a large format pattern, so I decided to draft one.

Beth began by prototyping her pattern in miniature, the first version of which came out looking like a mountain goat. Cute, Beth explained, but not what we needed for a Unicorn. Using Heather Dutton's Love Struck fabric, Beth made a second mockup. Then she tried out a few unicorn designs in different colors, all of which ended up being rejected. This was exhausting for me because at several points I was called upon to give an opinion. Stage 3: Scanning & More Designing. Once the pattern was drafted, Beth scanned the pieces and digitized the pattern by tracing each piece using the pen tool in Illustrator. Working in Illustrator allowed Beth to keep all of the pattern pieces in vector format, which means that she would be able to scale up the pattern easily. After more strenuous discussion in which I was forced to offer yet another opinion, we finally settled on a sort of tattooed design for the Unicorn fabric. Here are Beth's notes on that stage of the process:

The surface design itself was really quite easy to create. We used Illustrator to create some interesting shapes and defined each shape as a pattern brush. Next, we created concentric circles and used each pattern brush as a "stroke" on the circle. The pattern brush feature in Illustrator is amazing and automatically adapts your design to fit the path. The next step was choosing a color palette. We selected some colors using Adobe Kuler and a Spoonflower color map and dropped them into the design. It's important to set your colors using a color map or color guide, otherwise you'll likely end up needing to swap out colors later.

The miniature prototype, which requires only a fat quarter of fabric, is actually part of the full pattern (here). You can get the mini-version by just ordering a fat quarter of the giant pattern on our linen-cotton canvas.

Stage 4: Building to Scale. The next step, of course, was to bring the Unicorn to life. Beth scaled everything up and laid it all out in a single, giant file, which she ordered on 5 yards of our linen-cotton canvas. [You can find the giant Unicorn sewing pattern here.] Beth did lots of tweaking during all of this, while I put my own limited skills to work on a sawhorse made from 2" x 4"s (with 30" legs and a 24" back using simple, aluminum sawhorse brackets purchased for $6). Beth initially created the Unicorn's skin with an invisible zipper, which was a decision abandoned when the zipper snapped during Step 5.

Step 5: Bringing the Unicorn to Life. The last stage of the process required no fewer than two giant trash bags of polyfill, which Beth managed to score free of charge from Craigslist. They turned out to have been left over from a Christmas display at our local Museum of Life & Science and consequently, as an added bonus, were seeded with the perfect amount of glitter (one of the primary ingredients in Unicorn-making, as everyone knows). The Unicorn was at this point officially dubbed Cornelius. Let it be known that not only did I help stuff the Unicorn, but I also played an instrumental role in breaking the invisible zipper that Beth had carefully placed on its back.

Step 6: Hair. I wouldn't normally give hair its own step in the Unicorn-making saga, but in this case I don't think there's any way around it. Every child that has seen this Unicorn so far has been mesmerized by it and Beth herself spent many, many hours making it. She explains, "I decided that I wanted the Unicorn to have hair that kids could brush. Little did I know that sewing hair wefts with ridiculously long synthetic hair would be such a lengthy and complex process!" I think the results speak for themselves. 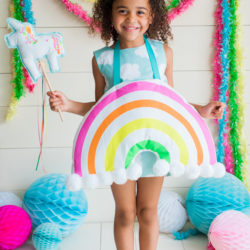 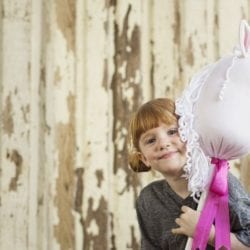 How to Make A Magical Fleece Unicorn

« Keeping Your Toiles Local
Classic and Modern Fabrics book giveaway and Victory patt... »
We use cookies to enable and enhance your site experience. By continuing to use this site, you agree to our use of cookies.OkLearn more